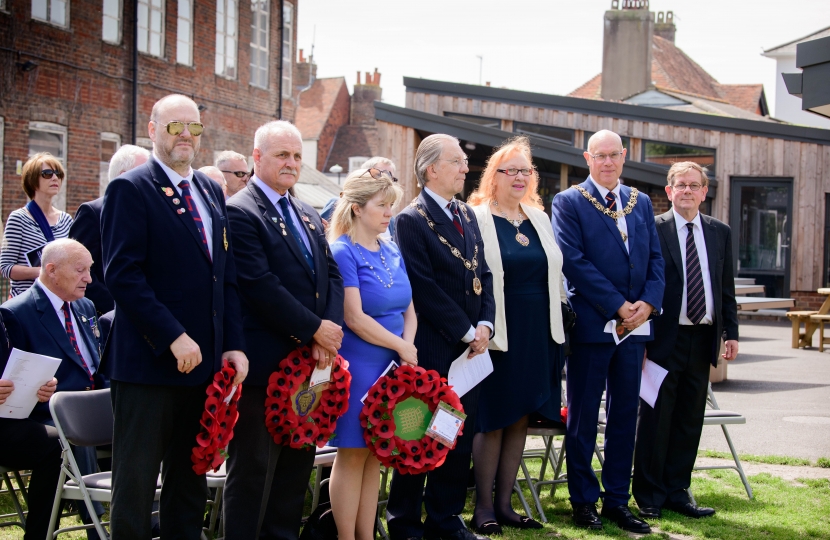 Maria Caulfield MP has joined the Deputy Lieutenant of East Sussex, the Mayor of Lewes and others at a service of dedication of a new war memorial at Lewes Old Grammar School, that coincided with 100th anniversary of the signing of the Treaty of Versailles.

Following research into the names on the Lewes War Memorial, 14 of those killed from the town were found to have studied at Lewes Old Grammar School, which has prompted the school to add a plaque to their recently installed war memorial which will feature the names, regiments and date & place of death of the 14 men.

The date of the service (28th June) was chosen as it marked the 100th Anniversary of the signing Treaty of Versailles that officially brought the conflict to an end.

During the service wreaths were laid by Maria Caulfield MP, the Mayor and other dignitaries as well as representatives from local regiments past and present. The dedication of the memorial was led by Rev. Canon Richard Moatt.

Maria Caulfield MP said “Sometimes when people look at the names on a war memorial it can be hard to imagine what their lives were like. Local school children will now be able to see these names and know that over 100 years ago these men were studying in the same classrooms as them, which really brings home the sacrifice that these men made.”

“It is so nice that LOGS have been able to put this memorial in place and hold such a moving service of dedication on this important date 100 years after the signing of the Treaty of Versailles.”