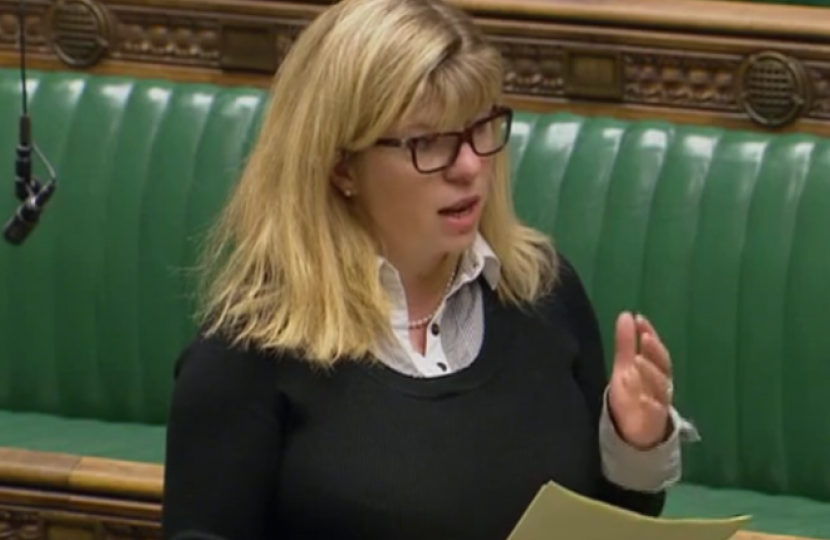 The Member of Parliament for Lewes Maria Caulfield led an Adjournment Debate on the 20th January to highlight the glaring inefficiencies of the Southern Rail service.

In an impassioned speech, Maria condemned the failures of Southern Rail over the last 18 months. She highlighted that although ASLEF had halted their strike action, this was only one of the many problems facing Southern Rail and the normal service is still completely incapable of accommodating the needs of its passengers.

Maria exposed the many issues that have plagued Southern’s passengers in the last 18 months. These included reducing the number of carriages from 12 to 10 or even 8, which has caused overcrowding; poor customer service; the failure to stop at specific stations; and infrastructure failures which have accounted for over 50% of Southern Rail delays.

Maria also revealed some other problems that have received less public attention, but are no less important. The first of these is the lack of modernisation facing payment. The outdated key card system has proved to be insufficient and urgently needs to be updated toward a system that resembles TFL’s payment system. This problem also overlaps into the compensation that customers have expected to have received, but as yet have not. The inefficiency and delay in receiving this compensation unfortunately is a microcosm of the overall Southern Rail service.

The final issue Maria highlighted was the unacceptable plight that disabled passengers have endured. Firstly, the service has been incapable of accommodating disabled passengers, and there have been examples of disabled people being unable to get on trains. Also, the rail replacement services have proved to be inadequate, as they also have been unable to accommodate disabled people and it is unacceptable for them to have to face the ambiguity of constantly relying on taxis.

There is also a systematic lack of “changing places” for disabled people and they have faced the humiliation of not being able to go to the toilet or change discreetly. This has led to one example of a disabled person having to get changed on the platform, which is absolutely unacceptable.

An encapsulation of Maria’s argument is that a normal Southern Rail service is still inadequate, and substantive changes need to be made quickly to remedy the problems that have detrimentally affected its passengers’ lives.

Maria concluded her speech by saying: “We want a good Southern timetable with trains that turn up on time; that are not cancelled or delayed; that do not terminate early; and that are accessible for all passengers. If that does not happen, we want the reassurance that Southern will be taken to task and dealt with by means of financial penalties or, if it comes to it, a change in the franchise.”

The Under Secretary of State for Transport responded by acknowledging Southern’s failures and the unacceptable consequences entailed that Maria highlighted. He announced that £2 billion had been invested into improving the GTR network, which will vastly improve the rail infrastructure.

However, he clarified that the Department of Transport have been monitoring the situation closely and will explore a range of options to rectify the inadequate service of Southern Rail. He also announced an action plan to directly tackle the issues facing disabled passengers.

“I very much welcome the positive comments from the Minister which confirm the Government’s commitment to fixing the long-standing problems that this network, and the passengers that travel on it face on a daily basis. I remain absolutely committed to ensuring that the journey experience of my constituents vastly improves, and will ensure that the Government takes the necessary action to make this a reality.”